Is the state’s cancellation of the competition results evil or not?

In 2020, PPP Expertise Eurasia prepared more than 200 people to take the Certified PPP Specialist exam at two levels: Foundation and Preparation. And it is very encouraging that these specialists keep in touch with each other and share their impressions of the course and the PPP situation in general.

And we, for our part, actively support this activity, including through surveys of specific cases.

The results of another poll are very interesting: «Does the government have the possibility to cancel the results of last year’s tenders if this year’s tender was more profitable for the state partner?
The poll was conducted in the January 2021 telegram channel.

The reason: in the third, December, contest, the price of electricity was lower than in the previous two…

India: The record low tariff of 1.99 rupees (1 rupee=$0.014=1.04rub) per kilowatt*hour achieved in the Gujarat solar power plant auction in December had unexpected consequences: the state cancelled the results of two previous auctions that had resulted in much higher tariffs that the grid company was required to buy power at.

Gujarat’s power company, Gujarat Urja Vikas Nigam Ltd (GUVNL), which provides transmission and distribution of electricity in the country, is the buyer (offtaker) of electricity generated by solar plants.
Now, this company has received permission from the state electricity regulator to hold repeated auctions for the 700 MW Dholera Solar Park and the 100 MW Raghanesda Solar Park.

In previous auctions held last August and September, Dholera’s rate ranged from Rs. 2.78 to Rs. 2.81 per unit, with the five winners receiving projects of 100-200 MW each. There was only one bidder for the Raghanesda park, SJVN Ltd, which got all 100 MW at a tariff of Rs. 2.73 per kWh for 25 years.

After the third auction, in December, with a record low price, GUVNL sent an offer to the winner of the previous auction to revise the tariff for Raghanesda Park to reflect the results of the December auction.

In response, the winning SJVN agreed to lower it to 2.65 rupees per unit, but no more.

The state disagreed and canceled the results of the previous two tenders altogether, announcing a re-bidding…

The question was: Do you support the government’s decision to cancel the results of the previous tenders?
The answers were distributed as follows: 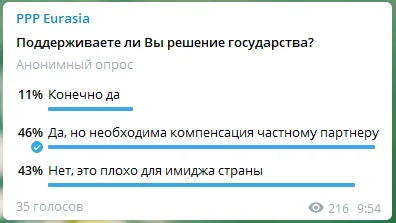 And such a result can’t help but please…

We deal in detail with such a risk (Breach of Undertaking by a Host Government) in our training program for the certification of PPP specialists.
The questions we address include: political risk: can this risk be managed? Can it be avoided, delegated, managed, or should it still be accepted?