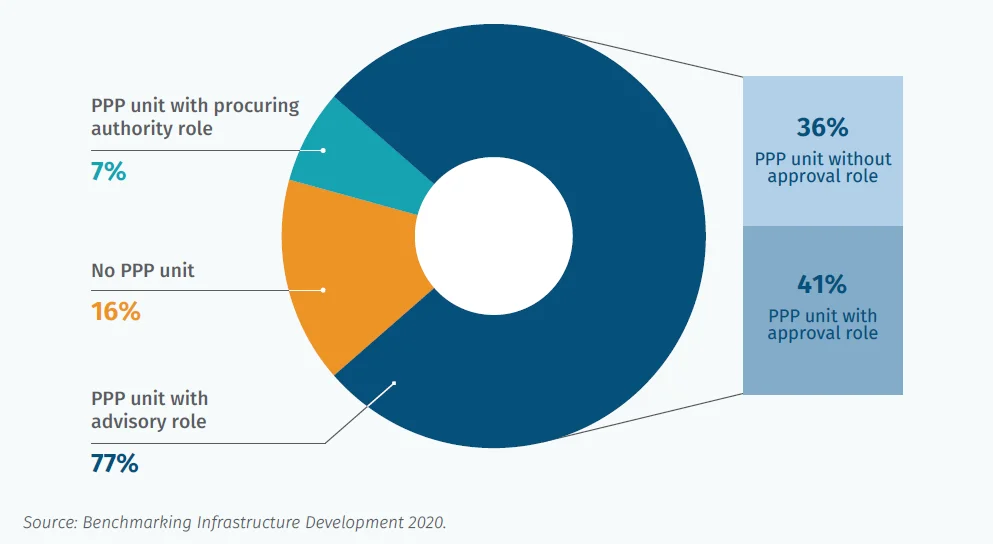 PPP agencies — do we need them?

Here and below we use data and information from the World Bank report Benchmarking Infrastructure Development 2020: Assessing Regulatory Quality to Prepare, Procure, and Manage PPPs and Traditional Public Investment in Infrastructure Projects

First, a definition of what a PPP Unit is.

So, a PPP Unit is a specialized government agency or a team of professionals within the government that is responsible for promoting a PPP program in the country.

Given the complexity of PPP projects, many countries do decide to create a centralized structure (PPP Unit) to provide administrative and advisory support and facilitate PPP development in the country.

The creation of such a structure is usually considered one of the key elements in the formation of a new PPP structure.
For example, in Uzbekistan, under the recently adopted PPP law and related regulations, the Agency for Public-Private Partnership Development was established as the authorized government body in the field of PPPs.

A separate PPP unit is present in 84 percent of the countries surveyed by the World Bank.
Although the roles and functions of PPP units vary, most share a common set of core tasks:

regulating and guiding PPP policy (in 72 percent of the economies with a PPP unit)
Capacity building of other government agencies (73 percent)
Promoting a PPP program (71 percent)
Technical support in implementing PPP projects (69 percent), and
oversight of PPP implementation (62 percent).
If you summarize what PPP Units do, you can see that they play a large advisory role for the PPP Unit in supporting the procuring authorities directly (usually the relevant line ministries).
About a third of PPP Units are involved in identifying and selecting PPP projects, but this task is usually also performed by the line ministry bodies themselves.

Finally, post-project evaluation and monitoring is very rarely carried out by PPP units, with less than 7 percent of countries surveyed having a PPP unit performing this function…